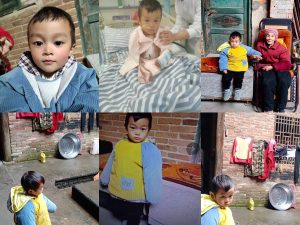 Three-year-old Guo Nanchen recently recovered from open heart surgery he had in China at the end of February. Our team in China visited him at home in early March after he had recovered well.

There are six members in his family who live in a rural area. They are all farmers. His grandfather fell three stories when he was building a house. His surgery cost the family far more than they could afford to pay. His grandmother suffers with hypertension and takes regular medication. His family’s debts were over 100,000 RMB ($15,370 US) when they discovered he had Congenital Heart Disease at the age of one. As he grew older, his health continued to deteriorate and heart surgery costs were more than the family could afford. Fortunately, Agape Asia Foundation was recommended as a source to help with his life saving surgery.

Guo Nanchen’s father said, “Thanks for those who helped my child. We are very much relieved with the help from you. Thank you! We will relay this love on and on in the future.”

We are grateful for medical donations for this young boy’s life saving surgery … now he has the chance of a good life and future!

The new year is a time for new habits. If you have