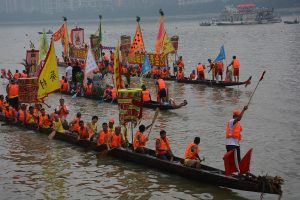 Qu Yuan (343–278 BC), was a Chu State official in the Warring States Period. He was the earliest famous poet in China. When the Chu capital fell, the patriotic poet drowned himself in the Miluo River. The local people were said to have paddled out on boats, either to scare the fish away or to retrieve his body. The dragon boat races represent the attempts to rescue and recover the body of Qu Yuan. This is said to be the origin of dragon boat racing. 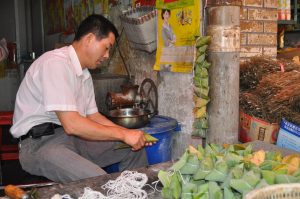 Zongzi (粽子zòngzi /dzongdzuh/) is the most traditional Dragon Boat Festival food. It is related to Qu Yuan commemoration, as the legend says that lumps of rice were thrown into the river to stop fish eating his drowned body. Zongzi is a kind of sticky rice dumpling made of glutinous rice filled with meats, beans, and other fillings. Zongzi is wrapped in triangle or rectangle shapes in bamboo or banana leaves, and tied with soaked stalks or colorful silky cords. 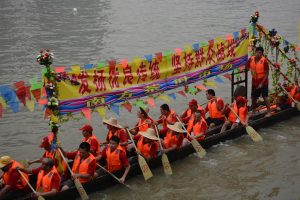 Dragon boat racing is the most popular activity during the Dragon Boat Festival. This folk custom has been held for more than 2,000 yea, and now it has become an international sport. A dragon boat is a human-powered wooden watercraft. It is shaped and decorated in the form of a Chinese dragon. Dragon boats vary in size by region, and the crew numbers change accordingly. Generally it is about 20–35 meters in length, and it needs 30–60 people to paddle it. During the race each team has a drummer in the head of the dragon boat; the drummer is the heartbeat of the team. Dragon boat teams paddle harmoniously at a pace which is set by the drummer, and do their best synchronized efforts.

Next Tuesday Agape Asia will kick off our year end

We celebrate another young life saved through our